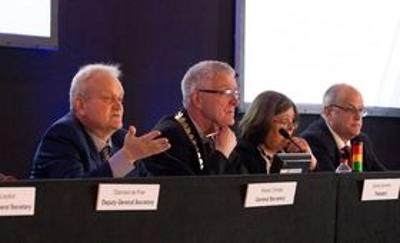 ASTI General Secretary Kieran Christie today called for significant investment in education so that schools are able to provide the necessary supports for students coming from the Ukraine:

“This crisis and its impact on the education system is evolving on a daily basis.”

Mr Christie also said the ongoing lack of investment in schools, coupled with innovation overload, has led to an occupational stress crisis in teaching:

“Inadequate CPD, limited staffing and inadequate resources, implementing new curricular models, and teaching overcrowded classes are some of the contributing factors that have sapped the morale and energy of our members.”

The ASTI General Secretary also called on the Department of Education to revise and improve assault leave for teachers.

Mr Christie said assault leave arrangements for teachers must cover “violence in all its forms and particularly that directed against people because of their gender or sexual orientation”.